Atlanten is a Doom 3 mod I worked on for some years. Given the time required to finish it, I was forced to stop development, but you can start a game that will go through a small set of levels demonstrating the central gameplay concept.

Please excuse the somewhat unpolished look of the production. This was a one-person project, and all mod-specific programming, scripting, modelling and level design, among other things, were done by me.

Working on Atlanten, I published most of my learnings on a page dedicated to the Doom 3's id Tech 4 engine.

The mod is inspired by an article by Ben Croshaw. 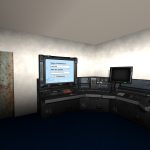 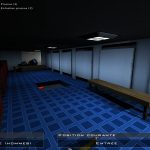 (The game is playable in English as well as in French; the language button is in the main menu.)

To install the mod, extract the Monmod folder into Doom 3's main directory. The default path for the Steam version, in Windows, is:

To launch it, run Monmod.exe. Open readme.txt to know all essential information.

Important note: This mod is only compatible with the original release of Doom 3. It will not work with the BFG Edition.

In the near future, a woman named Klara finds herself trapped on an abandoned cruise liner. She finds a security terminal and manages to connect to the security camera network through her brain implant (a common accessory in this futuristic setting). Only a few moments later, she is painfully blinded when a power surge explodes the monitor and damages her eyes.

She will need to use the ship's live camera feeds to find a terminal able to send a distress call.